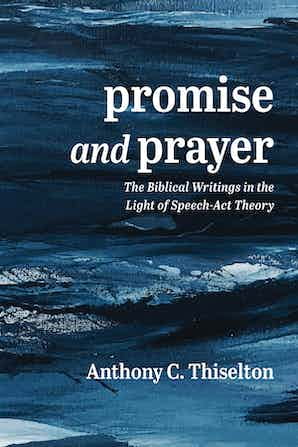 Speech acts are world-changing utterances, such as vows, commands, blessings, and others. Thiselton applies Speech-Act theory to religious texts, institutions, and practices. He argues promises and prayer in Scripture are speech acts.

Though it is uncontroversial promise-making is a speech act, Thiselton argues prayer is also, contrary to the view prayer is merely “therapeutic meditation” (44, 53). Rather, prayer changes situations and necessarily involves others. How can petitions effect change when they are offered to an unchanging God (70)? Requests change the situation for answering prayer (53), and aren’t “an attempt ‘to twist God’s arm’” (71).

Thiselton argues speech acts aren’t “word magic” (13-14, 57) but become effective by all participants, including institutions. It would’ve aided discussion to mention and expand upon felicity conditions (i.e., the requisites for success) to show why speech acts fail. Promises must be sincere, marriage pronouncements must come with ministerial authority, etc.

He is content to regard texts as speech. The social ontologist Barry Smith developed document-acts theory, to extend speech-act theory and show speech and documents diverge in felicity conditions, range of effect, etc. A law can outlast its signers and constrain citizens indefinitely. The Biblical case studies fit better as document acts.

Thiselton engages widely, and charitably, across philosophical and Christian traditions. He also summarizes some developments by noteworthy scholars in the Appendix. Those interested in theoretical formalization might turn to these authors or Thiselton’s own earlier works on the same topic. This text will be most useful to theologians and Biblical scholars who are unfamiliar with speech-act theory, and to philosophers of religion interested in how speech-act theory intersects with religious texts.